Text by Kuba Szreder on Mapping Artistic Economies as part of the call to Take Back the Economy. 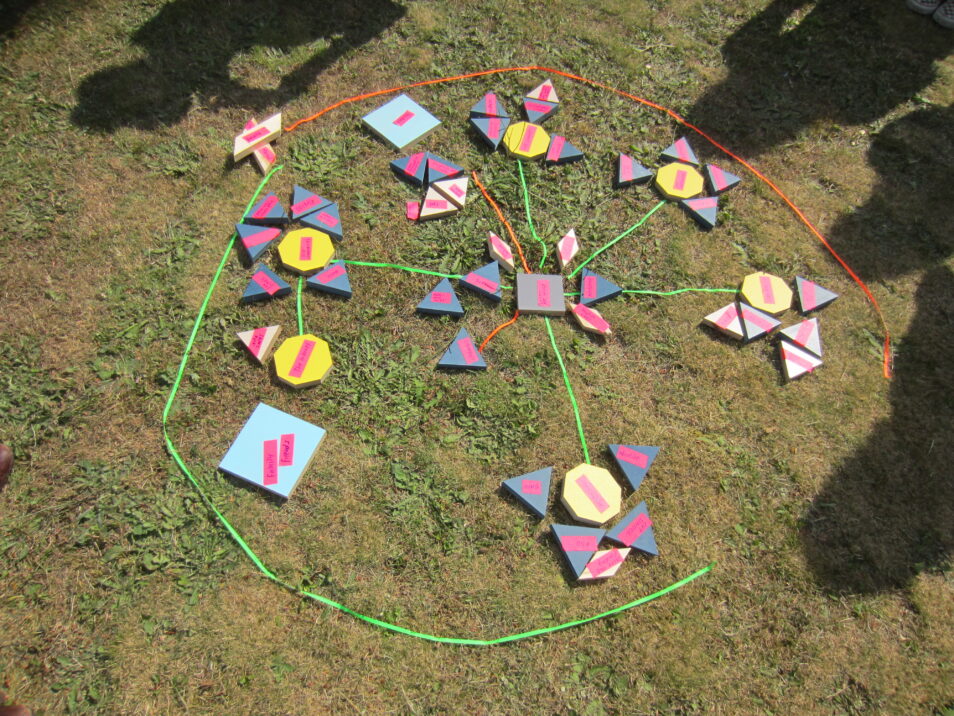 Image: Mapping Artistic Economies during the Launch of the Centre of Plausible Economies, June 2018 at COmpany Drinks, Barking

Centre for Plausible Economy is a pata-institutional research cluster affiliated with the Company Drinks, an artistic enterprise located at the eastern edge of Greater London. We established CPE together with an artist, activist and organiser Kathrin Böhm, to analyse and reimagine the everyday economies – in the contemporary art and in society at large (Szreder and Böhm, 2020). Consequently, one of its main tasks is to map and strengthen the systems of mutual help that are established by art workers to sustain their practice. In 2018 and 2019 we collaborated on a research project Re:drawing the Economies, co-organised with the Communities Economies Research Network, a feminist thinktank devoted to the promotion of community economies.  As part of this exercise, we organised a series of workshops, during which we worked together with a group of art workers to create diagrams illustrating their own daily economies. Unsurprisingly, their diagrams reminded complex spiderwebs as, in order to make their ends meet, they linked together non-artistic jobs, part-time teaching assignments, occasional sales, commissions or projects, family and community support. However, in spite of the complexity of these everyday economies, the artistic universe at large is one of the most unequal social universes, pervaded with the winner-takes-all-economy that amasses wealth, visibility and prestige at the top of artistic hierarchies.

When we collectively tried to imagine this big picture, we picked up the visual metaphor of an iceberg, floated by the feminist economists J.K. Gibson-Graham to analyse the patterns of exploitation and economic invisibility structuring capitalist economy (Gibson-Graham and Dombroski 2020). They use this visual metaphor to debunk the ‘capitalocentric’ visions of economy, that wrongly focus on a small peak of financially trackable economies – monetary transactions, wage labour, and capitalist  enterprises – as if it was the only economic form that matters. As they argue, in reality this monetised realm hovers above a hidden mass of financially unremunerated and thus economically invisible labour (such as the feminised labour of love and care), of nonmonetary exchanges, and informal self-organisation. This is what makes the economy tick – carers caring for young or elderly, workers informally helping each to solve company’s problems, chats that make the trade flow.

Together with CPE we adopted this image to cognitively map the – symbolic and monetary – economies specific to the global circulation of contemporary art. Our findings are published in a short visual essay Icebergian Economies of Contemporary Art (2020), in which we pictured artistic economy as an iceberg, where a small and yet extremely visible sector of prominent institutions, fairs, biennales, universities, and auction houses hovers above a hidden mass of artistic ‘dark matter’. The latter is another visually potent term that frequents recent disputes about the social and economic underpinnings of contemporary art.

The hypothesis of dark matter was formulated by Gregory Sholette (2011), whose short video presentation was featured in the first season of Beyond the Now. He coined this term to describe a hidden mass of artistic production – both amateur and professional – that maintains the gravity of the artistic universe, but whose role is undervalued, unrecognised, and frequently underpaid. Often the uneven distribution of prestige is paired with economic inequalities: just think about the underpaid and invisible work of support personnel, like art handlers, museum educators, fabricators or cleaners. Also artists proper – though conducting more authorially attributable types of work (by creating art works) – fall prey to these inequalities – as the vast majority of them is poor, working for naught but scraps of reputation, motivated by engagement in their own work (social, artistic, etc.) rather than financial expectations or dreams of fame.

In this context, it is vital to underline the important role played by the mesh of support structures established in order to sustain a variety of artistic practices, that includes both authorial pursuits and unauthored tasks. In accordance with Howard Becker’s sociological analysis, art worlds (always in plural) are networks of social cooperation that sustain production and distribution of whatever people partaking in them decide to call art (1984). If you want to imagine a nascent art world, just think about an artist-run space – people pitch in and share tasks to organise and put on exhibitions, find a bit of money to run it (either by sales, applying for projects, selling drinks), convince friends to volunteer, communicate with audiences, sometimes even distribute works by arranging sales. It is a basic system of mutual help, of a rather informal nature, that is interconnected with other overlapping social institutions, like public museums, art schools or private galleries, and partakes in more overarching social nexuses, like art markets, biennale circuit or social movements.

It is important – in the spirit of feminist economies – to emphasise the dynamic character of these larger social assemblages. The artistic mainstream, with its grandiose institutions, stellar sales and larger-then-life events,  is not a stable, monolithic, totalised structure of all-encompassing nature, but rather one art world out of many. This art world dominates over artistic dark matter by sucking money, encroaching on the field of vision, and creating art stars, shining with the stolen light of the anonymous labour of others. This mainstream is also a meshy system of mutual help, but of a less generous nature. It is a rather elitist clique, based on exclusion, whose borders are policed by gatekeepers. Thus, it can be an art world of the one percent and for the one percent. However, it is better to take this vision with a pinch of salt. Just as not everything that shines is gold, not every larger institution, public agency or biennale is a sinister outlet of ‘onepercenters’. In fact, possibly very few are, as most of the art worlds hover in the twilight zones of semi-visibility, connected enough to create interlocal networks, but not really benefiting from the systems that amass wealth on the top of social hierarchies. Even more importantly, the bulk of the artistic iceberg is enormous, and most art folks try to make their living (and art) by successfully operating in this hidden abode of social wealth. It might not be as stellar as living at the peak, but tends to be much more spacious.

Some of the art worlds that emerge in the hidden bulk of the iceberg are at odds with the artistic mainstream – when it comes to types of art sustained and modes of sustaining them. Operating a community art centre somewhere in a rural area is lightyears apart from the ultra-rapid modes of transaction and hypervisibility of large events. It is not about geographic distance. Squatting former salt docks in the centre of Venice, and organising there a functional art-activist hub, can be just as much distanced from the world of private art fairs as the rural community art centre is. These emergent art worlds are a natural matrix of socially engaged art, in its many different guises. They often emerge in wake of such grand social events like Occupy movements of the early 2010s, creating systems of mutual support, or – as collective Basekamp and Stephen Wright call them – art sustaining environments (2013), that sustain art in many different modes of engagement. Just think about the graphic ateliers that prepare flyers and posters for the social movements, groups of people making banners and other visual props for larger demos or occupations,  crews of meme-warriors flooding social media with visual commentaries – people collate their time and resources to make all those things happen. They engage in the most glorious art of all – they create (art) worlds. Interestingly, taken from this bottom-up perspective, the definitions of art become porous as well.  Some of the activities thus sustained can – or have – the status of art, others not, but in any case they all are examples of collective creativity – not only in terms of what is made (installations, speculative design, performative actions, graphic posters), but also in terms how it is done.

What is true in normal times, is even more true in the moment of pandemic, and will become even truer in its aftermath. From my daily observations, endless talks with fellow art workers, and projects of activist advocacy undertaken by art-activist organisations in Poland and UK,  I reckon that for most art workers, the systems of mutual support became even more important when global networks of contemporary art were forcefully suspended. The spiderwebs of their daily economies had to expand to absorb new levels of stress, not in the geographic but social and economic sense.  When the flow of projects, commissions, and sales was disrupted, people had to find new sources of income. I know the stories of art workers who went into farming olive trees, at a friendly farm somewhere in Spain. One of my students, instead of working in bars, started to teach kids online classes in drawing. Others had to juggle home-schooling and operating artistic enterprises. Some progressive artistic institutions managed to redirect their exhibition budgets to create impromptu funds to support artists with small stipends. This was matched by a rather patchy system of public funds – on both governmental and municipal level. Art workers – lacking in stable employment – were mostly not eligible for the systems that covered the costs of furlough. The funds tailored to support artists in particular were – at least in a country like Poland– rather miniscule, and structured on a competitive basis of grant systems, as art workers were supposed to apply with their projects, competing with others to access a diminished pile of resources. One hears very mixed reports about the art market, as it seems that some galleries seem to be faring relatively well, especially when not dependent on partaking in fairs and having versatile networks of clients and stable systems of online sales. In the end, a bulk of rescue funds arrived on the top tiers of financial pyramids, art market included, rather than in the pockets of (art) workers. Anyway, when the rich got richer, and the grant machines stuttered, proving their limited usefulness, the spiderwebs of mutual support extended in order to absorb the structural shocks.

It would seem sensible to learn a lesson in resilience and strengthen this mesh of intertwined spiderwebs, engendering the creative ecosystem that combines a multiplicity of support structures – like informal support, mutual care, and progressive public institutions, but match it with the strong, welfarist systems of support, like the universal basic income, just as advocated by the recent manifesto Art for Ubi (Institute of Radical Imagination). Redirecting social wealth to reinforce the bulk of the economic and artistic iceberg would create a firm matrix for the plethora of emergent art worlds, truly democratic hotbeds of social creativity.

KUBA SZREDER is a researcher, lecturer and independent curator, based in Warsaw, working as an associate professor at the department for art theory of the Academy of Fine Arts in Warsaw. He co-curated many interdisciplinary projects hybridizing art with critical reflection and social experiments, such as exhibition Making Use: Life in Postartistic Times (together with Sebastian Cichocki, Museum of Modern Art, Warsaw 2016). He actively cooperates with artistic unions, consortia of post-artistic practitioners, clusters of art-researchers, art collectives and artistic institutions in Poland, UK, and other European countries. In 2009 he initiated Free / Slow University of Warsaw, with which he completed several inquiries into the current conditions of artistic labor. In 2018, together with Kathrin Böhm, he established the Centre for Plausible Economies in London, a research cluster investigating artistic economies. He is editor and author of books, catalogues, chapters and articles tackling such issues as the political economy of global artistic circulation, art strikes, modes of artistic self-organization, instituting art beyond art market and the use value of art. Currently working on an English edition of his book ABC of Projectariat (2016), a critique of the political economy of artistic circulation.