The Art of the Cooperative

Warsaw Biennial, The Centre for Plausible Economies and the COmmunity Economy Research Network 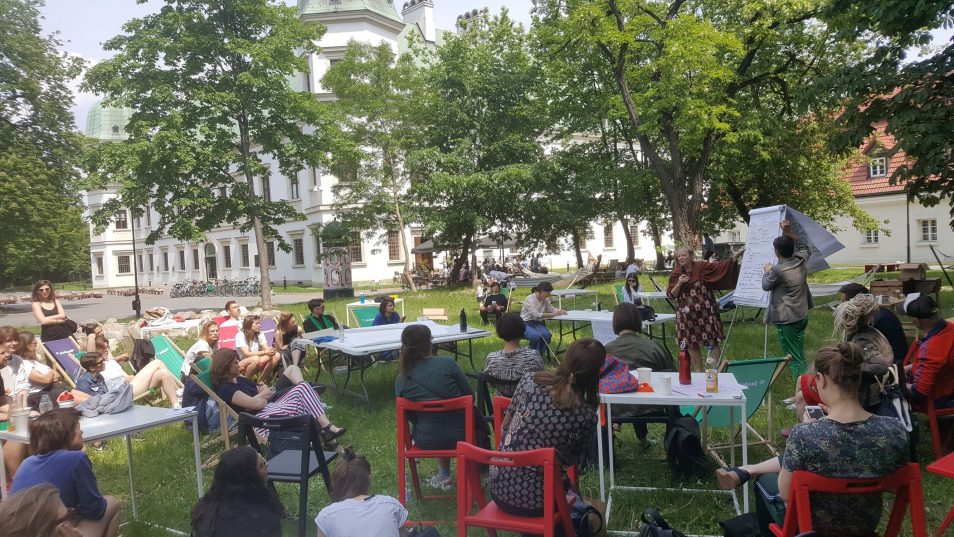 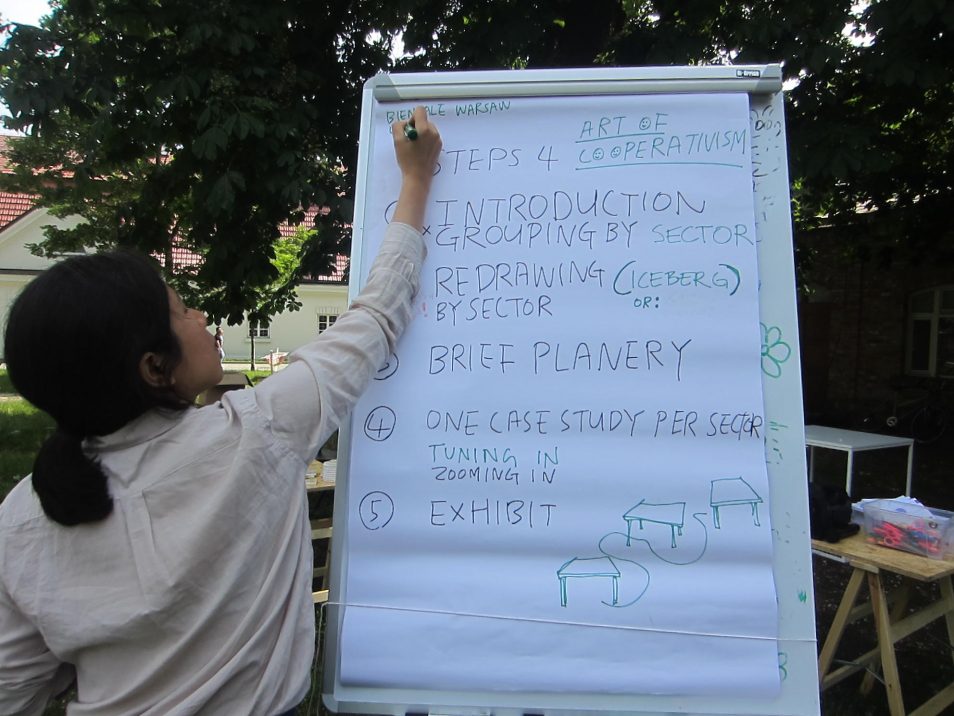 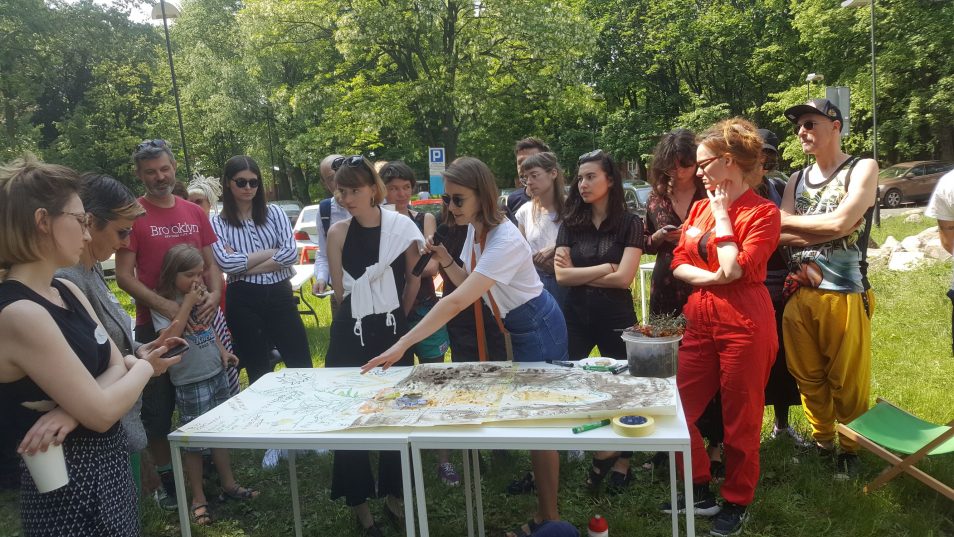 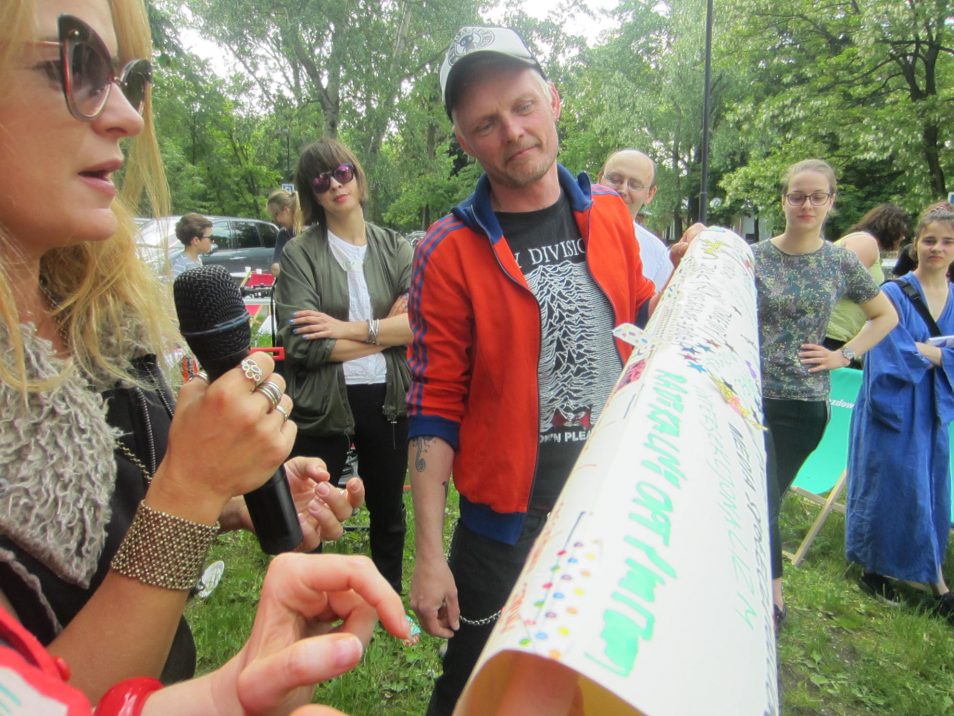 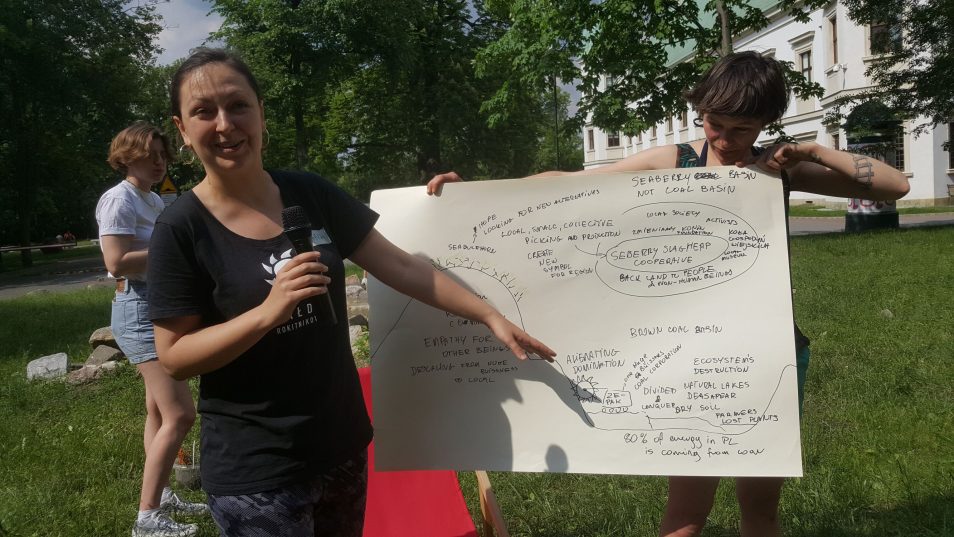 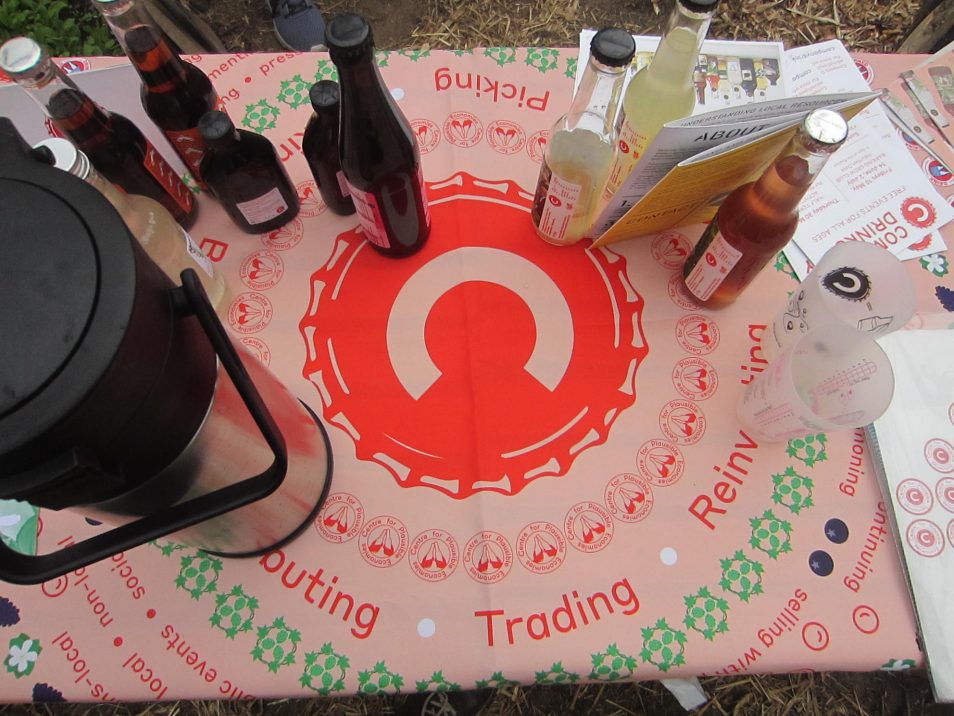 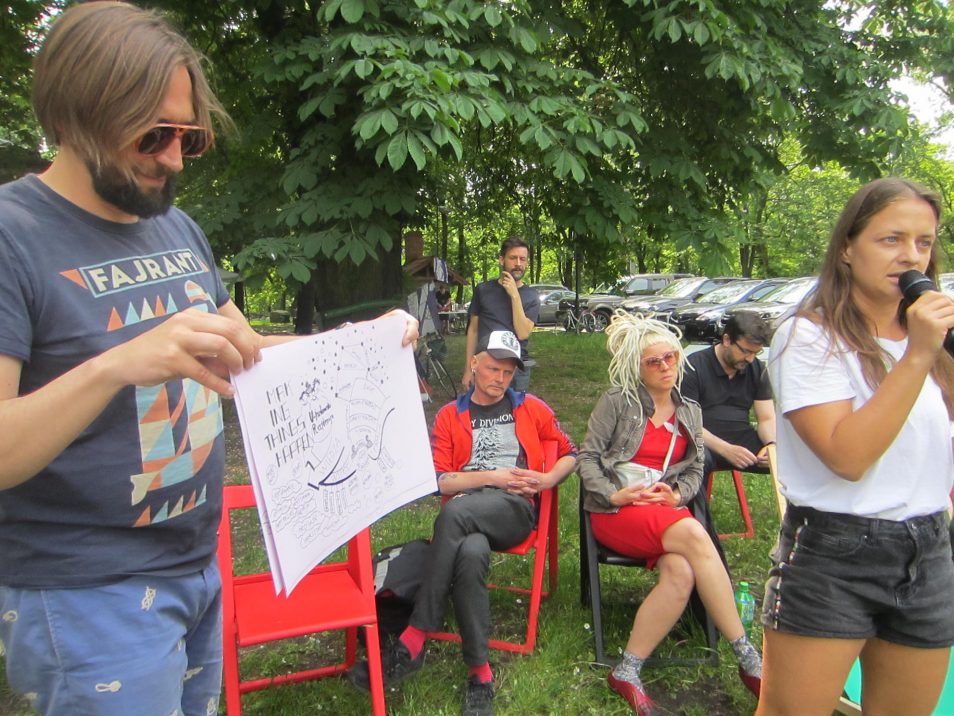 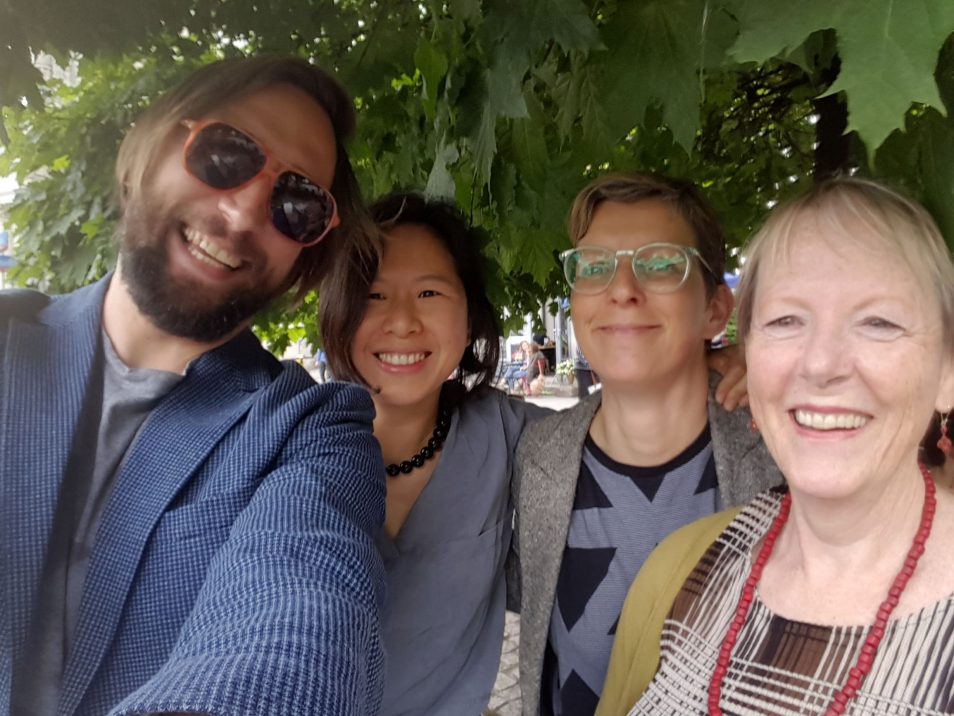 The Art of the Cooperative is devoted to experiments at the intersection of art and economy, collective reflection and playing with social economies in art and outside of it. The programme is the result of the cooperation with the Centre for Plausible Economies and Community Economies Research Network which work in the area of social economies, i.e. economic systems that aim at serving the community and not amassing the capital. CERN and CPE draw inspiration from the feminist critique of capitalism in order to better understand and support its alternatives. CERN is an association of consumer and production cooperatives, exchange networks (for machines, files or knowledge), democratically formed enterprises, cultural institutions and artistic collectives from all over the world – from Australia to Bolivia, Korea, Great Britain, Netherlands, to Poland. Their purpose is a grassroot movement to socialise economy understood in its everyday practical dimension – how, where, for whom and with whom we work, shop or spend our free time. They are looking for an alternative which would be effective here and now, in a micro- and macroscale, in everyday life and in systemic solutions.

The Centre for Plausible Economies is an artistic and economic centre which searches for alternative solutions to the issue of artistic poverty, using artistic imagination in the economic practice. The CPE programme responds to the growing social demand. Artists realise that most of them are more likely to find poverty and exclusion on the art market, rather than the promised moon and adoration in the spotlight. That is why alternative art worlds emerge at such a rapid pace. Socially useful museums 3.0 appear. Attempts are being made at reforming artistic institutions in the spirit of feminist economies. Artists work on a life-size scale, they execute their ideas in the collective practice; they throw themselves into the current of social imagination. Not only do they create paintings, but they also take them to protests. They set up cooperatives and hair salons, dressed as wild boars they speak for the sisterhood of all beings, and organise strikes in support of the Earth. The programme includes not only the economic dimension of these enterprises. Its aim is to take up these ideas to further stimulate the economic imagination and shift the limits of what seems possible – in art and outside of it– even by a few millimetres.

The first day will include lectures and presentations of artists, curators and theoreticians affiliated with the CPE and CERN. One of the invited speakers is the initiator of the CPE, Kathrin Böhm, a London-based artist and the founder of Company Drinks, an artistic enterprise specialising in the production of sodas from fruit picked during walks in shared public spaces, or from plants universally but mistakenly rejected as tasteless. Each bottle manufactured by Company Drinks is at the same time a work of art, and CD runs its bars on local markets, in serious institutions and museums, as well as international art fairs. Binna Choi, curator and director of CASCO Art Institute in Utrecht, will speak about the evolution of CASCO from an “ordinary” art institution into an institution of common goods. Katherine Gibson, a world-renowned feminist economist, will speak about social economies and why the economy based on the circulation of money is only the tip of the iceberg.

On the second day, we would like to invite you to an open idea picnic titled Re:drawing Economies. Katherine Gibson and Kathrin Böhm work with the maps of everyday economies. These are diagrams illustrating how people try to survive day to day, how they organize their workplaces or systems of exchange – where they work and with whom, what do they manufacture and offer, how, with who and for what they barter, for whom and why they do it.

Such maps are often created in situ, during the workshops, they are arranged from what is at hand, drawn or painted, they allow people to better understand economic systems in which they function daily. In Warsaw, maps will be drawn together with the invited group of artists, collectives and cooperatives, but anyone can join the mapping activity. The event will take place in the picturesque park in front of the Ujazdowski Castle Cetre for Contemporary Art where a potluck picnic will be organized. We will fire the bread oven built in 2012 on the initiative of Juliette Delventhal – artist, chef and U-jazdowski resident. Organizers will provide pizza dough and staff, guests are asked to bring remaining ingredients.

An important element of the Art of the Cooperative programme is an artistic and organizational process culminating in the establishment a new post-artistic work cooperative in Warsaw. The May meeting will be the occasion for its first manifestation. The cooperative will be supervised by the team including: Adelina Cimochowicz, Kuba Depczyński, Kasia Kalinowska, Bogna Stefańska.

The project curator is Kuba Szreder, university lecturer, sociologist by education, theoretician and curator who has, for years, been analysing the political economy of the art circuit, as well as inventing and practicing its alternatives.

The Centre for Plausible Economies – established in 2018 by Kathrin Böhm and Kuba Szreder – is a para-institutional research centre affiliated to the Company Drinks in London. The mission of the CPE is considering the economic dimension of contemporary art, stimulating economic imagination and practicing economic alternatives in art and beyond.

Community Economies Research Network is an international research network, connecting social researchers, activists and members of the art world who share a common aspiration to gain a better understanding and popularisation of community economies.